COVID-19 Vaccine Update: Valley is offering walk-ins and appointments to receive a booster dose of the Pfizer vaccine to patients who meet specific criteria. Initial doses are also available. Click to learn more and to schedule an appointment.

You might feel like your heart is “skipping a beat” sometimes, which can be a sign of an arrhythmia (abnormal heart rhythm), but it’s important to remember that most arrhythmias are harmless.

Both Premature Atrial Contractions (PACs) and Premature Ventricular Contractions (PVCs) are early, extra heartbeats – most benign arrhythmias are these types, and don’t require that you have any treatment.

If you experience lots of PACs or PVCs, however, or have symptoms associated with them, that’s a sign that it’s time to be evaluated by a cardiologist, who may send you to a member of our group here at Valley.

Of course, some types of arrhythmia, are clinically significant. If we suspect that’s the case, we’ll work with you to personalize a treatment plan, beginning with tests specifically tailored to your situation.

Tachycardia is a very fast heartbeat, over 100 beats per minute. During exercise, the heart rate also goes up naturally. However, when tachycardia is an abnormal state, we call it tachyarrhythmia and must address it with you through further testing and treatment. Below, we discuss various types of tachyarrhythmias:

These arrhythmias begin in the atria, and are usually not life-threatening. Supraventricular arrhythmias can be an inconvenience because of their symptoms (chest pain, dizziness, pounding pulse, etc.), but can be treated with medication or catheter ablation which type of treatment you have will be decided after we work with you to evaluate your case.

Types of supraventricular arrhythmias include:

This rapid heartbeat accounts for 5-10% of tachycardia cases, originates in the heart’s atria. In this abnormal rhythm, a group of cells begins firing rapidly for no discernible reason. 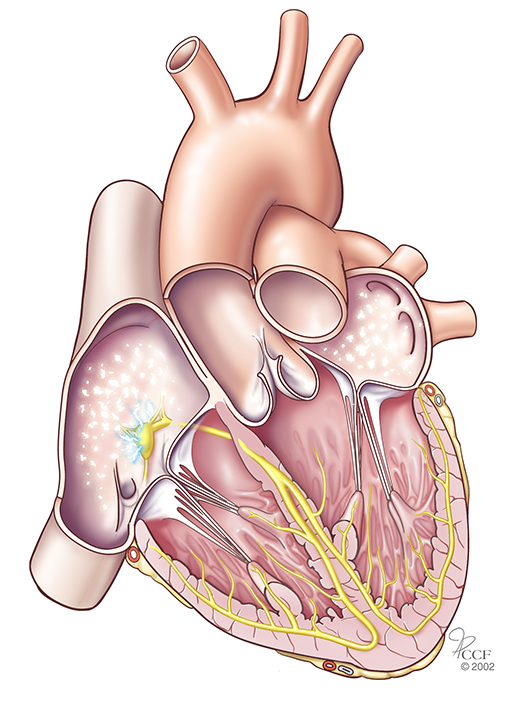 Of all the different types of arrhythmia, this is the term that most patients probably have heard of; that is almost certainly because this form of irregular heartbeat is so common. In fact, A-Fib is the most common type of arrhythmia in the world. In A-Fib, lots of electrical impulses begin and spread through the atria, all “competing” for a chance to travel through the AV node. This results in a rhythm that is irregular, rapid, disorganized, and chaotic – like an electrical storm in the atria – which leads to a loss of coordinated atrial contraction.

In A-Fib, the heart can beat up to 600 times in a minute in the atria, but the AV node only allows 200-250 of those beats through to the ventricle. In this situation, blood which is not being moved out of the atria can pool there, causing a clot and increasing the risk for a stroke. However, there are treatments available to mitigate this risk, from medications to stroke prevention devices, such as the Watchman device.

Bradycardia is a very slow heartbeat, less than 60 beats per minute, and it might be normal for some people. In trained athletes, for example, a low heart rate during exercise may be normal. However, when bradycardia is an abnormal state, we call it bradyarrhythmia and must address it with you through further testing and treatment.

Types of bradyarrhythmias include:

These arrhythmias begin in the lower chambers (ventricles) of the heart, and can be life-threatening if not treated promptly. Variations include:

V-tach is a serious condition and should be evaluated by a cardiologist at once. It is usually seen in patients who have previously had a myocardial infarction (MI, or heart attack) which has created a scar, which is “dead” tissue. The electrical signal goes around the scar, and this leads to a short circuit. However, a small proportion of patients can also have V-tach with a normal heart. In those patients, the condition doesn’t cause death, but can lead to syncope.

These disorders are not common, but if someone in your family has experienced one, it’s best to be evaluated by a physician to confirm your own heart health status.