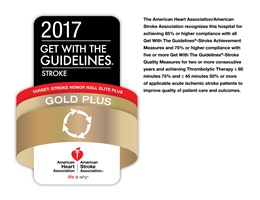 The Valley Hospital has received the American Heart Association/American Stroke Association’s Get With The Guidelines®-Stroke Gold Plus Achievement Award with Target: StrokeSM Honor Roll Elite Plus. The award recognizes Valley’s commitment to providing the most appropriate stroke treatment according to nationally recognized, research-based guidelines based on the latest scientific evidence.

To qualify for the Target: Stroke Honor Roll Elite Plus, Valley met quality measures for two or more consecutive 12-month periods which are developed to reduce the time between the patient’s arrival at the hospital and treatment with the clot-buster tissue plasminogen activator,  tPA, which is the only drug approved by the U.S. Food and Drug Administration to treat ischemic stroke. If given intravenously in the first three hours after the start of stroke symptoms, tPA has been shown to significantly reduce the effects of stroke and lessen the chance of permanent disability.

According to the American Heart Association/American Stroke Association, stroke is the No. 5 cause of death and a leading cause of adult disability in the United States. On average, someone in the U.S. suffers a stroke every 40 seconds, someone dies of a stroke every four minutes, and nearly 800,000 people suffer a new or recurrent stroke each year.

“This recognition from the American Heart Association and American Stroke Association demonstrates our commitment to delivering advanced stroke treatments to patients quickly and safely,” said Audrey Meyers, President and CEO of The Valley Hospital and Valley Health System. “Valley continues to strive for excellence in the acute treatment of stroke patients.”

“The American Heart Association and American Stroke Association recognize The Valley Hospital for its commitment to stroke care,” said Paul Heidenreich, M.D., M.S., national chairman of the Get With The Guidelines Steering Committee and Professor of Medicine at Stanford University. “Research has shown there are benefits to patients who are treated at hospitals that have adopted the Get With The Guidelines program.”

Get With The Guidelines®-S puts the expertise of the American Heart Association and American Stroke Association to work for hospitals nationwide, helping hospital care teams ensure the care provided to patients is aligned with the latest research-based guidelines. Developed with the goal to save lives and improve recovery time, Get With The Guidelines®-S has impacted more than 3 million patients since 2003.

Valley’s Stroke Center has also been recognized with the 2017 Healthgrades Stroke Care Excellence Award, which places Valley in the top 10 percent of hospitals in the nation for stroke care. Valley has also received the Gold Seal of Approval (also known as a disease specific certification) for stroke by the Joint Commission and the 2017 Women’s Choice Award as one of America’s Best Hospitals for Stroke Care, ranking it among the top 7 percent of nearly 4,800 U.S. hospitals.

For all press inquiries, please contact the Communications & Marketing Office.