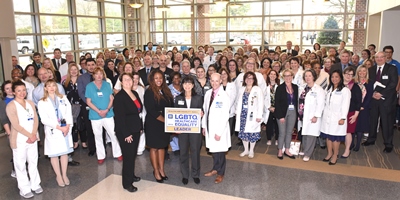 The designation was awarded in the 11th edition of the HRC’s Healthcare Equality Index (HEI), released in late March. Valley is only one of 418 healthcare facilities nationwide to receive the LGBTQ Healthcare Equality Leader designation. With a perfect score of 100 on the HEI 2018 survey, Valley is going beyond the basics when it comes to adopting policies and practices in LGBTQ care.

“Valley is proud to be designated as a 2018 LGBTQ Healthcare Equality Leader,” said Audrey Meyers, President and CEO, The Valley Hospital and Valley Health System. “It is our priority to deliver high-quality, inclusive healthcare and employment opportunities to all members of our community.”

In the 11th edition of the HEI, participants were given a numerical score based on their LGBTQ-inclusive policies and practices in four areas: foundational elements of LGBTQ patient-centered care, LGBTQ Patient Services and Support, Employee Benefits and Policies and LGBTQ Patient and Community Engagement. Participants that received the maximum score in each section earned the coveted status of “2018 LGBTQ Healthcare Equality Leader.”

“With some of our biggest battles still ahead of us, it is crucial that institutions continue to demonstrate that the march toward full equality is not slowing down,” said Chad Griffin, President, HRC. “For over a decade, the HEI has been the roadmap to closing the gap in ensuring equal care to LGBTQ patients and their families, and we urge every healthcare facility to join us in this continuing effort to provide inclusive care to all.”

About The Human Rights Campaign Foundation:
The Human Rights Campaign Foundation is an educational arm of America's largest civil rights organization working to achieve equality for lesbian, gay, bisexual, transgender and queer people. HRC envisions a world where LGBTQ people are embraced as full members of society at home, at work and in every community.

Photo caption: The Valley Hospital has been designated as a “2018 LGBTQ Healthcare Equality Leader” by the Human Rights Campaign Foundation.

For all press inquiries, please contact the Communications & Marketing Office.